The crucial role of the antenna as the interface within the wireless environment should not be underestimated. The slightest inaccuracy in the transformation and shaping of the RF signal due to antenna misalignment has critical and sometimes detrimental impact on the performance of the wireless system. A 1° to 2° variation can affect network performance, while a larger misalignment will result in costly re-climbs and re-visits.

Antenna attributes, such as pattern, height, and orientation, are essential elements for the original RF design to be maintained by the network. Deviations in the actual value of these parameters will lower network performance, and can ultimately adversely affect the bottom line for both carriers and general contractors hired to install and maintain the systems.

Guidelines must be established for adjusting the antenna alignment (azimuth, tilt, and roll) during installation of new towers or realignment of existing antennas. Adhering to these guidelines is vital for efficient operation of any wireless system, and is even more critical for LTE networks.

Proper antenna alignment is critical to control intra and inter cell interference, particularly with LTE. A key parameter in achieving high data rates in LTE is the ability to generate high CINR (carrier to interference plus noise ratio) throughout the cell coverage area. Accomplishing this task is hard enough in close proximity to the tower site, but is considerably more challenging at the cell boundaries, where the received signal is at its weakest level and interference is at its highest.

LTE also has the promise and potential of self-optimization (SON). The SON algorithm recommends optimized orientation settings for the antennas and, if allowed by the operator, automatically adjusts the azimuth, tilt, and roll of the antennas. For the SON to be effective, the actual orientation of the antennas needs to match the corresponding data recorded in the SON database, which is based upon the original RF design for each site. Inconsistencies between the actual and recorded values will render useless the purpose of SON, and may actually degrade rather than improve the system optimization.

The Effect of Azimuth and Tilt

Inconsistencies in setting up antenna azimuth and tilt during tower installation will reduce overall network performance. However, the degree of quality degradation depends on the amount of the discrepancy between the designed and installed parameters. Further, inconsistencies in establishing these parameters during installation vary the network coverage and capacity.

Depending on the site and initial coverage area, an adverse cumulative effect will occur if antenna misalignment is greater than 3° on multiple towers. There will be significant performance and quality issues due to the slight antenna tilt variation, as both coverage and quality gaps increase by up to 100% with ±3° of tilt error.

In spite of these factors, many antennas are misaligned – either due to improper installation or environmental conditions shifting the antenna over time. Currently, many antennas are aligned using a compass. In these scenarios, a skilled user must adjust for magnetic deviation and magnetic interference from a host of environmental factors that can skew the results, making it inefficient at best and ineffective at worst.

A study of U.S. operators showed that 46% of surveyed tower sites had at least one sector with an azimuth variance greater than 10°, and 31% had an m-tilt variance of more than 1°. Figure 1 provides a breakout of sites with a given azimuth variance.

The Real Cost of Misalignment

Antenna misalignment has a profound and negative effect on the financial bottom line of both general contractors and carriers. Focus often centers on how an ever-so-slight change in antenna direction can dramatically influence the customer experience. Slower upload and download speeds, which can be a direct result of antenna misalignment, result in less data charges for carriers, meaning they are not maximizing their investment. Poor network performance associated with antenna misalignment can lead to customer churn that can reduce income for carriers, as well. Additionally, antenna misalignment does not maximize the RF spectrum, which ultimately will limit the number of services that carriers can offer.

There are other costs associated with antenna misalignment that are more direct. Billions of dollars have been spent deploying, installing, and maintaining 4G LTE networks. Nearly 20% of the operational expenses (OpEx) for these networks are associated with operations and maintenance.

Antenna misalignment falls into that 20%, and can lead to costly site re-visits and re-climbs to correct issues. If general contractors have to deploy teams to adjust antennas on existing base stations, those crews cannot work on new projects that generate income. Figure 2 outlines the costs associated with sending a three-man crew to re-climb and re-verify an existing site. The out-of-pocket costs total approximately $500 but the “real” expense is nearly $5,000 – ten times the out-of-pocket cost! That is because lost revenue must be factored, as that crew can’t move forward to installing or upgrading a new tower site. If you add the multiple that nearly 50% of all sites are misaligned to the level in which they need to be corrected, these financial figures become astronomical for general contractors.

The economic impact of site re-visits is even greater for carriers. Estimated out-of-pocket costs associated with having a technician conduct drive tests at an existing site is approximately $2,500. Revenue lost because the site is delayed from going on-air and the overall build plan being stalled as a result is much greater. 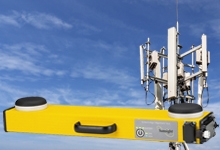 These costs can be dramatically lowered by installing the proper antenna alignment solution. There are tools that can help broadband LTE networks meet their designed capacity, and ensure the best possible return on the multi-billion dollar investment associated with 4G networks. As importantly, they help eliminate costly site re-visits and re-climbs, and make sure a tower’s performance is equal to the original RF design.

Not all antenna alignment tools are created equal, and certain performance specifications must be considered. To maximize bandwidth of 4G LTE networks, as well as their investment, many carriers are specifying an antenna tilt of +/- 0.25°. To meet this stringent requirement, as well as others, antenna alignment tools must be highly accurate. The solution shown in figure 3 utilizes a unique design that integrates advanced accelerometers that allow it to capture downtilt and roll to the +/-0.25° mandated by carriers. It also incorporates a two-GPS system to produce real-time azimuth measurements of up to +/- 0.3° RMS and +/- 1.0° R99.

Figure 4 shows the expected probability vs. heading error of the antenna alignment solution shown in figure 3. A 0.5 meter antenna spacing was used that resulted in a +/-0.53 R95° (95%) instantaneous heading accuracy. The expected instantaneous performance of the solution should be along the 0.5M red line. Due to the complexity of the cellular antenna environments (in-band RF, physical obstruction, high-multipath possibilities), as well as the proximity of the GPS antennas to the GPS receiver in the antenna alignment tool, the accuracy specifications were maintained at +/-1°, well within the recommended +/-3° tolerance.

The use of GPS satellites for antenna alignment is vastly superior to a compass and parallels the processes used by most third-party auditors. Using an antenna alignment solution that incorporates the same technology as the auditors helps to eliminate time-consuming disagreements that can lead to added expenses associated with verifying results.

Nearly half of all tower sites require re-visits to correct antenna problems. The re-visits and re-climbs associated with antenna misalignment have a significant financial impact on general contractors and carriers. Selecting the proper antenna alignment solutions can ensure towers are installed to the original RF design and maintain their alignment to reduce costly site re-visits and re-climbs. Additionally, maintaining proper antenna alignment will allow networks to maintain their designed capacity and coverage, bringing a greater return on the multi-billion dollar network investment.